Something about the new year makes me look around and want to replace things I own. Out with the old, in with the new! I know, how very first world, 1%, consumerist of me. To ring in 2017 with a bang, the first thing I replaced was something that doesn’t need replacing at all. My recent(ish) Netgear WiFi Router. Apart from the management interface designed in the 90’s by hardware engineers, it has served me pretty darn well. The WiFi is fast everywhere in our house, the routing…well it routes…and it has done the best job it can to distribute the ultra slow Internet we have here at home around my house.

But when Andy Ihnatko (my co-host at Relay FM) told me about his new Google WiFi mesh network, I instantly wanted it. I couldn’t just buy it though, I’m impulsive at the best of times, but at $299USD for a pack of 3 even I needed a reason. Then it dawned on me, sometime this year the new house that we’re building will be finished. This new house as it happens is much bigger and has more bedrooms than our current tiny house. Yes, what this house needs is good WiFi, and it won’t get that with just one router alone! What this new house needs is a new style of router, one that has multiple nodes that seamlessly mesh network together!

Lame attempt at justification over I headed to Amazon and to my amazement found they’d happily ship it here to our Penal Colony in Australia. The first thing that surprised me when it arrived was how nicely it was packaged. The second was just how small each of the units is: 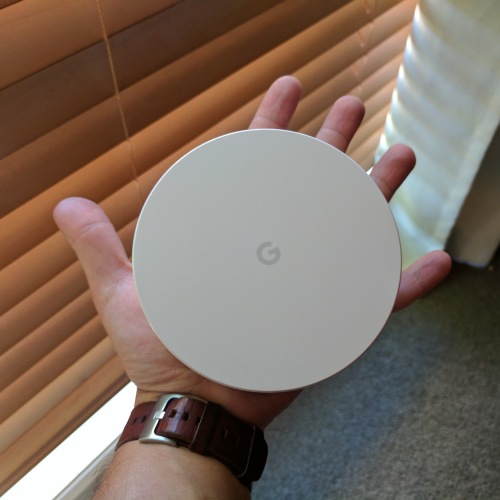 A white cylinder, one LED strip through the middle of it and on the bottom two Ethernet ports and USB-C for power. The USB-C part was really handy since it came with US power plugs. I already own a lot of devices that charge via USB-C so finding a spare adapter or two was easy. From there I installed the Google WiFi app and was impressed with just how easy it was to set up. It got me to scan a QR code on the bottom of the first device and walked me through plugging it in and setting up a WiFi network. Basically the first unit you set up and plug into your router via Ethernet becomes the primary device, any others you add automatically mesh with that first one, or if your house is big enough each other. On being prompted to plug the second one into power it found it straight away. A short mandatory update later and my new WiFi network was live. Being curious I broke out a great app called Netspot and it confirmed that my house was all lit up in sweet, sweet green WiFi.

I tested file copying to various devices and that was fast and error free. Next up was my pet hobby, Rocket League on the PC for a few minutes of gaming. Here I encountered my first and only roadblock. Every minute or so my ping would go from a reasonable 65 to an unplayable 500+. I quickly figured out that my kids were watching YouTube which causes problems at the best of times (welcome to Australia and my 3.5mbs connection). Not to worry though, this was the perfect time to test out the ‘priority device’ feature. This lets you choose a device to give a premium level of access to, in theory allowing the packets it’s sending and receiving to be prioritised over all the others. In fact the Google Help page about it specifically lists gaming as one reason you might turn this on. So I turned that on and my connection…got worse. This part made no sense at all to me…had Google, the fledgling hardware maker made yet another dud? Their previous failures like the Nexus 9 (with it’s frequent unexplained freezes and lock ups) made me all the more nervous. The amazing Pixel phone in my pocket though gave me some hope though, maybe I’d done something wrong? The next day happened to be a Skype recording of Material…and it too went rather badly.

Some quick googling of my setup afterwards revealed a few things that might be wrong and needed investigating. The first one being that when I’d plugged it into my router, I hadn’t changed any settings on it at all. So my router was both handling the ADSL connection and routing traffic through its LAN ports. The Google WiFi was trying to do the same, on it’s own 192.168.86.x subdomain while my router and devices attached to it were on 192.168.2.x. There’s no point in having two routers going like this (and it can sometimes cause routing issues like ‘Double NAT’) so I changed my router into ‘modem only’ mode, and re-configured the Google WiFi to handle that change. A quick trip to Rocket League revealed a drop in my ping from 65 to 52…a small but seemingly positive change. The frequent and unexplained lag spikes (even when quitting YouTube on the other device) also seemed to be gone. The final test though was what originally had me so excited about setting this up even before moving house: could I play a game like Rocket League (that is incredibly dependent on the latency of your Internet connection) while other people were also doing things on our Internet? Previously I had tried to configure the Netgear QoS settings that were meant to allow this and it didn’t seem to make a lot of difference. So I tried the priority device settings on Google WiFi again with this new setup…and lo and behold it now seemed to work! Even when everyone else in the house was doing things on the Internet the game would still mostly be responsive. I say ‘mostly’ because I was still getting occasionally slowdowns and spikes in ping, but it was night and day compared to what it had been like with the Netgear. The takeaway for this feature seems to be: it’s not magic, if something like Google Photos saturates your upload bandwidth during a backup for example, even the priority device will be affected. However if a few people are browsing or playing other online games, it seems to make a big difference.

All in all I’m really happy with Google WiFi, and I haven’t even mentioned things like being able to pause the Internet on a device (or a group of devices that you label) or just how smooth and seamless the app for it is. Literally the only change I feel like I’m missing is the ability to schedule these pauses: it would be great to kill the Internet to all the kids devices in the evening, and only have it turn back on in the morning at a reasonable hour. But this for me ticks all the boxes otherwise, the units are small and elegant so you can place them anywhere you have power. If you have a router that’s many years old or you have dead spots in your WiFi connection, then it’s definitely a worthy upgrade.