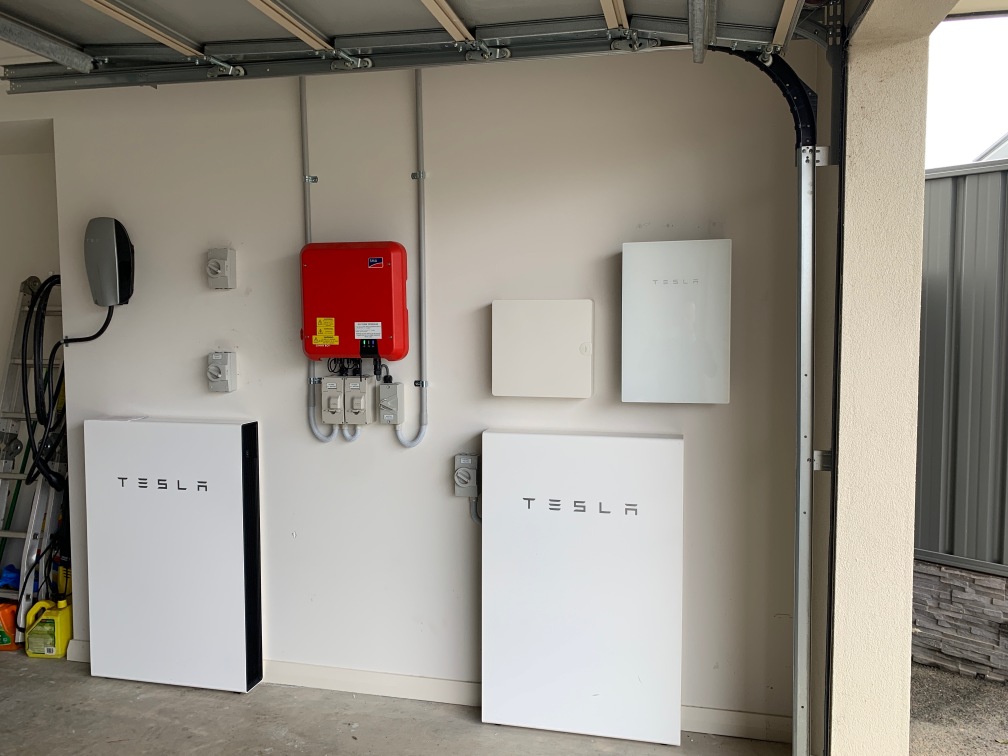 I purchased the first one in 2018, and when the South Australian government introduced a home battery rebate (which equated to $6000 towards a home battery) I decided to get a second. The solar inverter you can see in the picture is hooked up to a 5.1kW solar system (soon to be 11kW). I know it sounds like hyperbole but I think this battery might be the single best purchase I’ve made in recent years. The first and most obvious reason is this: 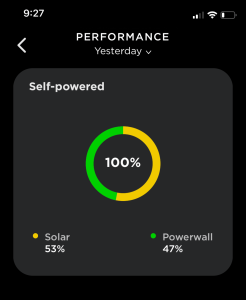 I have solar panels on the roof, generating up to 40kW/h of energy a day…and when I most need it (around 6pm when we’re cooking dinner and then later that evening) the suns not really around anymore to help me out. Additionally here in South Australia we pay on average about 40c per kW/h for power and are given around 10c per kW/h for power fed back to the grid. That means I pay roughly 4 times more for power from the grid than they pay me for power I give back. Something about that always felt wrong to me. I’d invested in power generation that sits right on top of my house, but when I needed them all those electrons were long gone and I had to pay for different, more expensive ones. Not to mention that mine were 100% renewable, who knew what sources these other nasty electrons came from?

So I did some rough maths, decided a home battery was the way to solve this problem and paid my deposit. Tesla being Tesla took their sweet time in fulfilling my order. In total it took around 6 months from when I placed the order to when the battery was installed. After about half a day for installation it was powered on and I immediately installed the app to see what was going on. I was greeted with this fun and rather mesmerising animation:

I’m not kidding when I say my wife and I have wasted many a moment just staring at that animation. It’s a fairly simple thing: there are 4 main items in the coloured circles. You have your solar panels (yellow) and the power grid (grey) which can both supply power. You have your house (blue) which uses power. Lastly you have the battery (green) which is both charged by the solar panels and supplying the power to your entire house until it’s flat. Almost every day after the battery was installed my entire house became self-sufficient. This meant while I wasn’t home the battery was being charged to 100%, and the rest of the remaining power sent back to the grid. When I got home the battery kicked in to power us through the entire night and into the next day. My power bill dropped to almost $0 overnight.

Then something even more interesting happened… 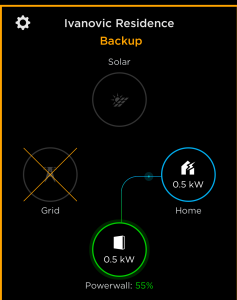 The power went out to our entire neighbourhood for a full 21 hours. The only reason I knew it was out was because I noticed all the lights in my home flickered for a split second. Then I got a notification on my phone from the Tesla app.

I got up off the couch, looked out the back door and our entire suburb was dark…except for our house. We watched TV, we made tea with the kettle, we cooked dinner and left our lights on the whole time. It was such a surreal experience knowing that our house was powered by that one (relatively) small battery in our garage. When we woke up the next morning and found out the power was still out I immediately wondered if the battery would continue to charge without a grid connection. I forgot to ask the installer about this, but sure enough when the sun came up, our battery went straight back to charging itself back up. We were, for the first time ever, completely off the grid.

At work that day I got a notification from the Powerwall that the power had come back on. The final kicker was that a month later our power company sent us a cheque for the inconvenience of having been without power for 21 hours and their sincerest apologies. I cashed that cheque grinning like a giddy little school boy knowing that we hadn’t been without power for a single second of that time.

So if life was so amazing with the panels and battery, why did I bother to buy more? Well summer was a rush, no doubt about it with 1MW of power generated by my panels:

Then, in the same disappointing way it finally did to Winterfell, winter came to my place as well.

And it was at that point that I knew if I could find the means I had to do 2 things: double my solar production so I could be self sufficient in winter while also doubling my storage capacity to cover those pesky heavy cloud days. Solar panels had almost halved in price since my original install, so the first part seemed easy. Then the South Australian government introduced a home battery rebate which sealed the second part for me. Even with the price drops and rebates, this second part of my journey became less about return on investment (which I’d calculated to be about 4-6 years) and more about just doing everything in my power to farm my own electrons and use them on my property. I was drunk on the power of, well, making my own power and I wasn’t about to let a stupid season defeat me. The second battery went in last month and the extra panels should go in next month.

When winter comes for me next year, you better be damn sure I’ll be ready for it.